There was no show like Beauty and the Beast and there isn’t likely to ever be again. When it debuted in the fall of 1987 Network TV was a recognizable mix of sitcoms, hour long dramas, and prime time soaps. The hour long shows in general fell along the lines of standard police procedurals or medical dramas. And CBS hoped, and generally tried to insist, that Beauty and the Beast would be yet another popular crime fighting series with the twist of a Beastly protector coming to the aid of its attorney heroine. The creators, and ultimately the fans, had other ideas.

From the beginning it was one of the most sumptuous shows on TV. The golden light of the tunnel world, the carefully cluttered bric-a-brac of the sets, and the clothing of those who made their home Below. Perhaps if there is one iconic thing people pick out after the Vincent makeup about the show it is the costumes. The production and costume design were glorious and it is a shame we have no behind the scenes guide or DVD extras devoting an in depth look at them. This article hopes to be a start at looking at the art of Beauty and the Beast. How the care that was threaded through every layer of the show is symbolized perfectly in the costumes.

Jean Cocteau’s masterpiece La Belle et La Bête was creator Ron Koslow’s biggest influence in the shaping of the series. The dreamy otherworldliness of the film is reflected in Below. The costumes are not the layers of heavy clothing of the homeless but rather fantastical creations mimicking eras from Medieval to Renaissance. In some cases the clothes looked ahead to the Steampunk movement that’s exploded in recent years.

Even Catherine’s wardrobe was built with care, power suits and contemporary fashion to fit her position and wealth but the dresses she wore for special occasions with Vincent were deliberately old fashioned. Consider the bridal white she wears on their first anniversary in "Temptation", or the dress she chooses to wear to Winterfest in "Dead of Winter", a long sleeved gown made out of a simple fabric, unadorned except for a rosette at the neckline.

The fans adored the tunnel world. A sumptuous air of mystery hung about the place and had the series went on viewers might have got more of the back-story of the origins of the labyrinthine network of tunnels and chambers that ran beneath New York City. It speaks to the artistic team that so many details can be filled in by the clothes and sets. We know the society we see is close to forty years old, we can assume that at first they dressed like the homeless and lost people they were, in bulky layers, or just the clothes they had on their backs when they found their way to the tunnels.

They were urbanites who probably had little experience with sewing or making things from scratch. Little by little they learned as their community grew and changed, a constant influx of newcomers and of members leaving for new lives Above or passing away. They scavenged for supplies and when clothes needed repair they did their best, untrained fingers stitching wide loops with whatever thread or lacing could be found, making a pair of pants last one more winter with a patches over the knee, taking a skirt a Helper donated and making two blouses out of it.  A key theme of the show, rebuilding and building a life from ashes.

One of the shows lasting legacies is instilling in viewers a need and respect for stories and traditions. The clothes we see the tunnel dwellers reflect both. They likely receive regular donations of clothing from Helpers and yet their clothing is patchwork. What sprung from necessity is now part of their identity. Clothes are cut up and transformed. There is no jealously over someone having nicer or newer clothes, everyone has what they need, and they take comfort in their clothes being well mended and clean. They reflect on the love that goes into making them and they reflect that love at others.

And yet the clothes mimic courtly designs of kings and queens, the kind that decorate the tapestries in the Great Hall. It speaks to the dignity of every person to be treated as well as the Lord and Lady of the manor and that money is not a marker of worth but character is. These are clothes made of rags picked out of garbage cans and of clothes that have seen much better days and yet they are beautiful. They are formed into doublets and capes and hoods and fine sweaters laced at the wrists. They're made for warmth and pratical use first, but with a sense towards the capital R Romanticism of the show. In other words, the idea that everyone is a King or Queen, even if they're in rags. And that life isn't about waiting for silk or being jealous of those who have it: in the words of Jim Henson, it's "taking what you’ve got and flying with it."

And this returns us to the fairy tale that starts it all. That love transforms, that as a quote from Henry David Thoreau reads "It’s not what you look at that matters, it’s what you see." Catherine looks at Vincent and she sees not a monster but a wonderful person, capable of warmth and kindness beyond most humans. The tunnel folk don’t see worthless street people and runaways. They see hurt fellow travelers who just like the rags and scraps they wear just need to be taken care of, cleaned and mended and made part of something whole. Something that is beautiful and is all the stronger for being made of many disparate parts, like our lives. Clothes aren’t just necessities, we wear our stories, and Beauty and the Beast was one of the first series to understand this. And celebrate it too. 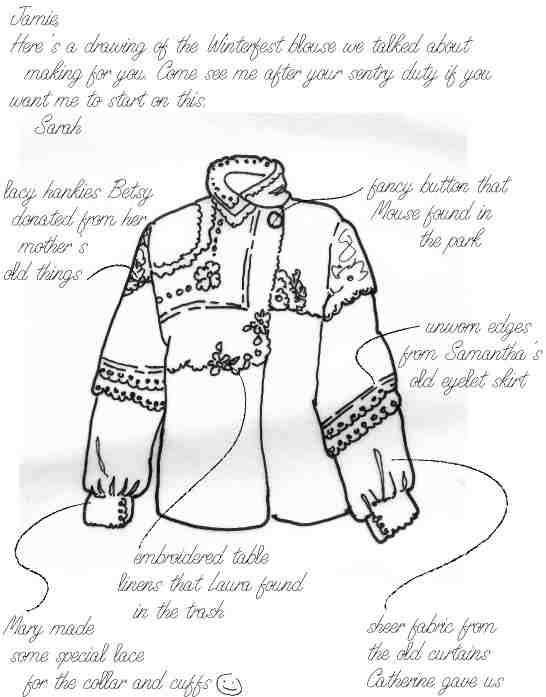